Posted on August 12, 2017 by evolvinghumansystems

In an earlier post I discussed the potential of TV White Space (TVWS) spectrum to help expand the availability of affordable high-speed Internet access in rural areas.  In this post I want to bring another underutilized spectrum band into the rural access equation: Educational Broadband Service, or EBS.

While there’s a lot that can be said about EBS spectrum and its history (for example, see Sec. 2.1 of this paper by Aleksandr Yankelevich) this post will focus on several factors that make EBS a potentially useful tool for addressing the rural broadband challenge as part of a FAST PIIPS (Fiber and Spectrum Together for Public Interest IP Services) connectivity strategy:

Michigan pioneers use of EBS to expand rural connectivity

To my knowledge, the most ambitious example of this waiver-based use of EBS spectrum is Northern Michigan University (NMU), which the FCC has authorized to use the full 112.5 MHz of EBS spectrum to serve the state’s thinly populated Upper Peninsula. Last November NMU began offering its Educational Access Network (EAN) service through other educational institutions in the region and directly to individuals seeking improved access to online educational resources.  In late March of this year the university announced receipt of a $6.5 million state grant from the Michigan Strategic Fund Board, which it will match with $3.2 million of its own funds to expand EAN’s existing coverage area to 64 cities and townships in the Upper Peninsula over a two-year period.

According to its web site, the EAN offers “best effort” off-campus connectivity using carrier-grade wireless equipment at a range of speeds and prices, none of which is constrained by monthly data usage limits.  Tiers include $19.95/mo. for 5Mbps/2Mbps service, $24.95 for 10Mbps/5Mbps, and $34.95 for a 15Mbps/5Mbps tier. The EAN site also notes that some “degree-seeking undergraduate and graduate students receive access to the EAN as part of their tuition and fees.”

Depending on distance from a transmitter and obstacles impeding line-of-sight, EAN end-user equipment options include portable LTE devices (usable where signal strength is strongest), indoor units, or outdoor antennas. The latter provide the strongest connections and are presumably necessary to obtain reliable service at the edges of network coverage. Based on the address a user provides upon enrollment, NMU provides recommendations regarding the type of connectivity devices best suited for that location. 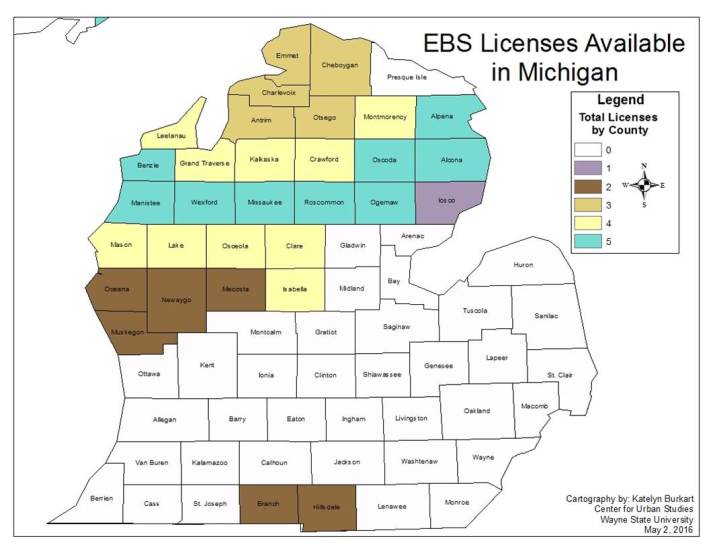 Though the EAN network is currently licensed to serve only Michigan’s Upper Peninsula, the above map shows that other rural portions of the state also have a substantial amount of unlicensed EBS spectrum that could be used to support an expansion of EAN or launch of another education-focused network (this county-based map provides only an approximation, since EBS licenses are currently issued based on a 35-mile coverage radius).

As the map indicates, 3-5 EBS spectrum blocks (67.5-112.5 MHz) remain unlicensed–and therefore potentially available via waiver or renewed FCC licensing–in much of the northern (and generally rural) portion of Michigan, whereas most of the southern portion of the state, where its larger and more densely populated cities are located, has no EBS spectrum available.

In my next post I’ll consider the overlaps between available TVWS and EBS spectrum, using a handful of small Michigan communities as examples. I’ll also consider how this combined spectrum availability can be combined with the increased availability in rural areas of open access high-capacity fiber backhaul, much of it funded through federal programs such as the stimulus-financed Broadband Technology Opportunities Program and the E-Rate program that has helped finance fiber connectivity for many schools and libraries. This extension of mainly nonprofit fiber to CAIs and other locations in smaller communities and rural areas can provide last mile networks–whether wireless or wired–with increased bandwidth and improved economics when it comes to the backhaul capacity needed to support reliable and scalable high-speed connectivity within their communities.

Below are links to the other posts in this series. Feedback from readers, especially constructive criticism, is welcome.